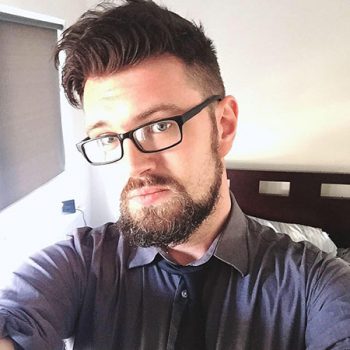 Grant Howitt is a games designer who lives and works in London. He’s written a few successful roleplaying games (Goblin Quest, Unbound, the new edition of Paranoia) and some less successful roleplaying games (Drunken Bear Fighter, Doctor Magnethands, Hey Kids: Let’s All Meet The Gin Wizard) as well as running live events, writing story content for Zombies, Run! and spearheading the weirdly under-subscribed Gonzo Tech Journalism movement. In a previous life, he was a games journalist, and he’s been mildly obsessed with all sorts of games ever since his parents made the mistake of buying him a Mega Drive when he was seven years old.

STUPID GAMES, CLEVER MECHANICS or BETTER LIVING THROUGH VIOLENCE explores how big stupid games about blowing things up form the cornerstone of our industry. But what can we learn from the mechanics behind them, masked as they are by the cavalcade of explosions and gunfire? Over six months, Grant pulls a single ingenious mechanic from a AAA action title and examining it in detail each session, seeing what sort of impact it’s had on games as a whole, where we can take it in the future, and why it feels the way it feels.